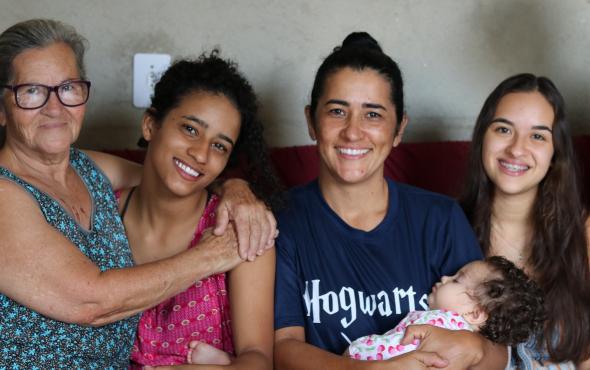 Back to stories
Brazil

Return of an expectant mother

Pregnant when she was still underage, Ana returned to Brazil to give birth and resume her education. With the help of her family and the reintegration support for vulnerable people, her life is back on track.

In need of support for her pregnancy

Ana arrived in Belgium at the age of 4 with her mother. At 14 years old, she got pregnant and decided to keep her baby. Given her family's situation and the fact that her mother had no steady job, it was jointly decided with her mother that Ana would return to live in Brazil with her father and grandmother who could both help her to take care of her child. In spite of the difficult decision to move back to Brazil since she grew up in Belgium, Ana agreed with great maturity.

At the beginning of 2018, Ana and her mother went to Solidarité Socialiste, partner of the IOM in Brussels, to apply for a voluntary return. When meeting the IOM return and reintegration counsellor, it was obvious that Ana's concerns mostly related to the monitoring of her pregnancy, the childbirth and the basic needs of the baby at birth. Since Ana had been in Belgium for 10 years, the question of learning Portuguese also came up. She already speaks Portuguese but cannot write it well.

Ana's return was organised as quickly as possible so that she could still travel and give birth in Brazil. Given her age and situation, Ana was accompanied by an IOM counsellor.

On her day back in the country, Ana's family was present to welcome her at the airport. A few days after her return, Ana's dad contacted the IOM office in Brasilia regarding the reintegration support. Since Ana's major needs were quite clear, the expenses could be made quickly: the support was used to cover the medical costs of the pregnancy monitoring and the childbirth. A baby chair and a baby buggy could also be purchased. Afterwards, it turned out that Ana needed dental care, and the rest of the support could also be used to cover some of the costs.

Ana is very grateful to have benefited from this support. She could give birth in a private hospital and not in a public one, which made it possible to go through the various steps with greater ease and carefree.

One year after her return, although she is a single mother, Ana is fine, and so is her daughter. Her reintegration can be described as successful. She receives a lot of support from her family and friends to raise her daughter and she could recently resume her studies. Ana and her daughter are also recorded in the public health system in case they would need it.

Ana: "I really care about finishing secondary school and going to university. Thanks to my family, I have the necessary financial and emotional support to move ahead and lighten the burden of being such a young mom."

Source: IOM
Ana being still underage, her account was gathered with the consent of her family.