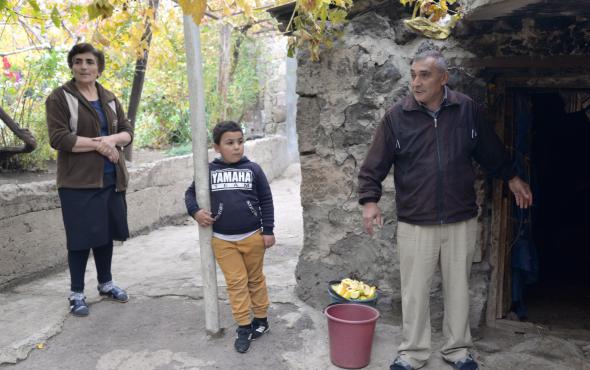 Back to stories
Armenia

In search of better health care

Anahit's family sacrificed some of their resources so that she could come to Belgium for treatment. After an expensive stay that was less beneficial than expected, she returned to Armenia.

Anahit was 53 when she left Armenia; she was suffering from health problems and was hoping to receive better treatment in Belgium. Her family had to sell livestock, which represented a large proportion of their resources, in order to pay for the trip and her medical expenses.

The treatment options in Belgium were ultimately not what Anahit was expecting, and life here was too expensive. She missed her family and finally appealed to the voluntary return program. To do so, she approached one of our partners in Mechelen and met with an IOM counsellor to discuss her options in Armenia.

Anahit returned to her home village and her husband and son. The small family makes a living from livestock and agriculture, and sells its crops and by-products at the market in Yerevan, the Armenian capital.

Anahit received advice from the IOM in Belgium and Armenia to determine what to do with the reintegration budget. After consultations, she decided to use most of the budget to buy livestock and expand her plantations. A small part of the budget was also used to buy coal, a fridge and a gas stove.

Anahit still suffers from health problems and reintegration assistance has also allowed her to pay for a minor operation.

Training to become a hairdresser

Almost a year after her return, Anahit says that reintegration assistance has had a positive effect on her and her family. Her fruits and vegetables are sold on the market and allow the family to be self-sufficient.

Anahit is currently benefiting from the Job Placement Programme, taking hairdressing classes in a nearby salon. After three months' training, she will become a paid trainee. In addition to breeding and agriculture, her goal is to open her own hairdressing salon at home.