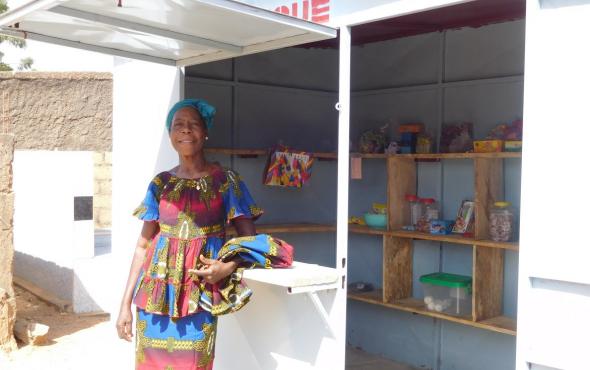 Back to stories
Burkina Faso

A return to autonomy

Agnès's procedure for protection in Belgium having failed, she returned to the family house in Burkina Faso with a project to get back on her feet and become autonomous.

A DESIRE FOR AUTONOMY

Before she came to Belgium, Agnès was living with her family in her parents' house. When her father died, other members of her family moved in and living there all together was becoming difficult for Agnès. She no longer felt at home. Back then, Agnès had a job: she was selling shea butter by delivering it by bike from place to place.

In Belgium, she tried to obtain a residence permit, without result. Since she could not get used to the climate in Belgium, she eventually decided to return to her family in Burkina Faso.

Temporarily with her family

Agnès moved back to the family house. Her family welcomed her with open arms by proposing her to move back with them. However, she wanted to have her own house after her return. But for that to happen, she had do secure a steady income first.

She did not expect any financial support from her family and that is why she was hoping that the Caritas' partner on site would help her develop a realistic action plan. Agnès also had health issues and she would use part of the reintegration budget to pursue her treatment.

A fridge against the warm climate

With the reintegration support, Agnès decided to open a small shop. She found a location close to where she is living, in the neighbourhood of a school.

The biggest obstacle for her activity was the warm climate of Burkina Faso. Given the fact that she had no fridge available and could not yet afford one, she could initially not sell drinks and food that had to be kept cool. That is why she started by selling mostly dry food and hygiene products. The store was not filled directly, but she is planning on filling it step by step in order to have well-stocked shelves.

At the time of this story, Agnès had not used all of the reintegration budget yet and she wanted to buy a place to keep food products and drinks refrigerated. For the shop itself, she also wanted to buy a fridge in order to be able to sell locally produced fruit juices, a commodity that would be highly successful with the scholars in the neighbourhood.