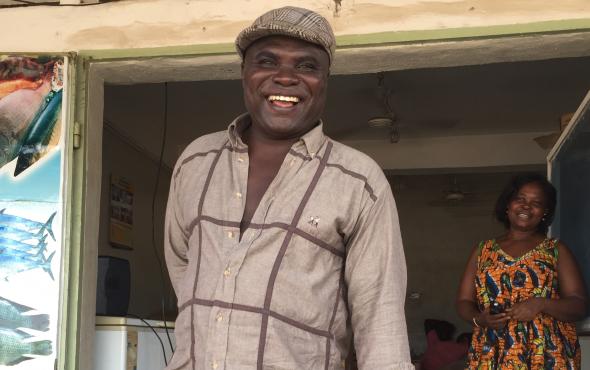 Back to stories
Ghana

30 years after leaving his country, Kwasi decided to return to Ghana. With reintegration assistance, he opened a cleaning products store in Accra.

When Kwasi decided to return to Ghana, it was 30 years after he had left his country. In fact, he was only 15 when he fled the country with some fellow countrymen to cross the desert, passing through Niger and Libya. After a long journey during which some of his compatriots lost their lives, Kwasi finally arrived in Europe. In the early 2000s, he arrived in Belgium.

Due to his health problems, Kwasi was able to regularise his situation on a temporary basis and to benefit from the assistance of a local non-profit organisation. But when his residence permit expired, his life became much more difficult and he had to depend on the generosity of his community. He contacted the IOM several times about a potential voluntary return but it was only after another rejection of his regularisation request that he decided to return.

Kwasi discourages his young countrymen from fleeing their country: "The road through the desert to Libya and by sea to Lampedusa is very dangerous. They must not take it under any circumstances. Furthermore, life in Europe is difficult and stressful, especially as an illegal immigrant. It is better to stay in Ghana and try to build something."

Having left 30 years ago, Ghana had become a new country for Kwasi. Fortunately, he was able to rely on the acquaintances that he had made in Belgium and who were now in Ghana. In Accra, the capital, he quickly found a place to live and the first few months' rent was paid for by the reintegration support.

Working with the IOM office in Ghana, he analysed the different projects that he could carry out with the reintegration support. His choice fell upon a cleaning products store, which he opened with a friend. In particular, the support was used to buy a large stock of goods. In the early days of his business, Kwasi did not have much money yet, but by saving, he hopes to extend his activity and open a car wash.

Kwasi appears to be very happy with his decision: "Our store is going really well, I'm busy every day and the stress I knew in Europe has finally disappeared. The financial and psycho-social support that I received from the IOM and Fedasil made a great difference."